MY JOURNEY THROUGH BILINGUAL MOTHERHOOD

As a mom,  I always say that my children came into my life to improve it.  One of the improvements is language. Twenty years ago when I found out I was pregnant, I felt the impulse to talk to my baby in Spanish, my native language, and in English. I believed, as I still do, that I could build a strong bond through communication. I learned English as a second language by taking lessons and using old fashioned methods. There were many simple words that I didn't know, like how to say pacifier (“chupete” in Spanish), diaper (pañal) or rattle (sonajero). At that time, we didn't have all the information from the internet at our fingertips like we do nowadays. So it wasn't as easy to learn “quickly”. Remember we are talking about 20 years ago!

The point is that, I wanted my daughter to learn a second language naturally at the same time as her native language. I wanted to give her the skill of growing up bilingual, as I knew how much of a benefit it would be for her in the future.

As my daughter began to grow up, we began to speak a little more in both languages. Greetings and farewells became common to say in English. We played with flashcards, read books and played simple games like seeing if we could name objects in both languages. It wasn't perfect, but it was simple and we were consistent and in time our effort would pay off.

By the time she started school, English was a subject that was far from being something she had to “get through”. Those sounds and words were familiar to her. And she enjoyed classes very much!

Fast forward to today, my daughter is twenty years old and she speaks both languages fluently. Of course, this is not a miracle! Classes at school, building habits like watching movies and listening to music in English, and of course looking for opportunities to speak with native speakers are all just seeds being planted that one day flourish!

I reflect often on that simple desire I had as a young mother. I think about the influence our actions or inactions may have on our children and how thoughtful we have to be in the decisions we make for them. Inevitably we will leave marks on our children. 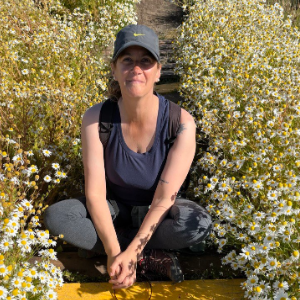 Hi! My name is Vanna. I’m from Argentina, but the English language has always been a very important part of my life. Thanks to being bilingual, life has taken me to unthinkable places, such as being a part of this great family, Bloom Spanish!